Here you will find the presentation and the demos from the session at Advanced Developers Conference C++ in Garching. I hope that you enjoyed it and can use some of the features I showed to you!

And please give your feedback for the session, if you have not done yet: http://www.adcpp.de/feedback/sessions.aspx

Just a note to the demos: You must install the Debugging Tools For Windows from the Windows SDK and copy the “Debuggers” Directory into “ADC2014”! Then all examples should work.

If you have any questions, just drop a comment…

It is still not possible to change the target framework in the VS2010 or VS2012 IDE in the project settings.
The only way to change it, is to manually edit the vcxproj file. For this you need to do the following:

Since Windows 200 it is possible to have auto completion for edit boxes which searches the file system and presents a drop down list with the current files. There is a simple helper function to enable this feature: SHAutoComplete

But this function only offers a simple interface to the more complex COM interface IAutoComplete.

While the “SHAutoComplete” is sufficent, it will not work if you want to have auto completion for files in the current directory. For this feature, you need to use the native COM interface:
For more info see also: Using Autocomplete

Here is an example of enabling auto completion for the file system, including the current directory: 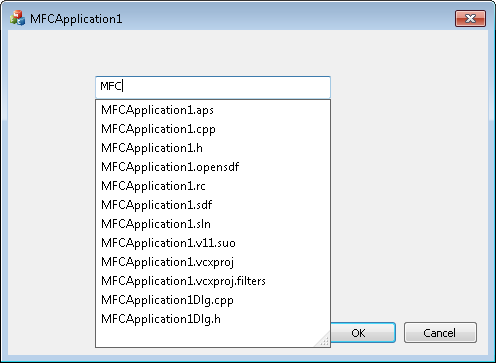 You can enable the auto completion for a control by calling this function:

Starting with VS2005(VC8) it was not possible to handle all exceptions in process. I have discussed this in “SetUnhandledExceptionFilter” and VC8 and in Unhandled exceptions in VC8 and above… for x86 and x64.

It seemms that the code I posted had been used in many Projects to handle all exceptions and to write a minidump in that case. Also someone has used it in a VB6 application and for this he needed to implement this function in a separate “CrashHandler.dll”. But now he got errors during the shutdown of the VB6 application. It seems that VB6 unloads the DLL before other DLLs and it seems that some other DLL is calling “SetUnhandledExceptionFilter” during shutown. This now leads to trouble, because the DLL is already unloaded.

Now I created a better and cleaner implementation for the “PreventSetUnhandledExceptionFilter” function, which also works in any situation, even if the DLL was unloaded 😉

After looking deeper into the MSDN Forums Client and into an C# NNTP server, I decided to integrate both Ms-PL projects into a single project:

The result is a single “Community Forums NNTP Bridge” which can replace the MS NNTP Bridge. It also integrates both web services (*social*, *answers*) into a single NNTP server; so the “feeling” is like before the split 😉

If you are interested, you can take a look (with full source code) into the alternative:
http://communitybridge.codeplex.com/

If you are using my $log$ substitution/keyword expansion for your source code with TFS, I have good news for your: I have upgradred my project to VS2010 😉
The latest download can be found here:
$log$ / Keyword Substitution / Expansion Check-In Policy (TFS – LogSubstPol)

The problem is, that the following two settings are not identical (Target Name, Target Extension): 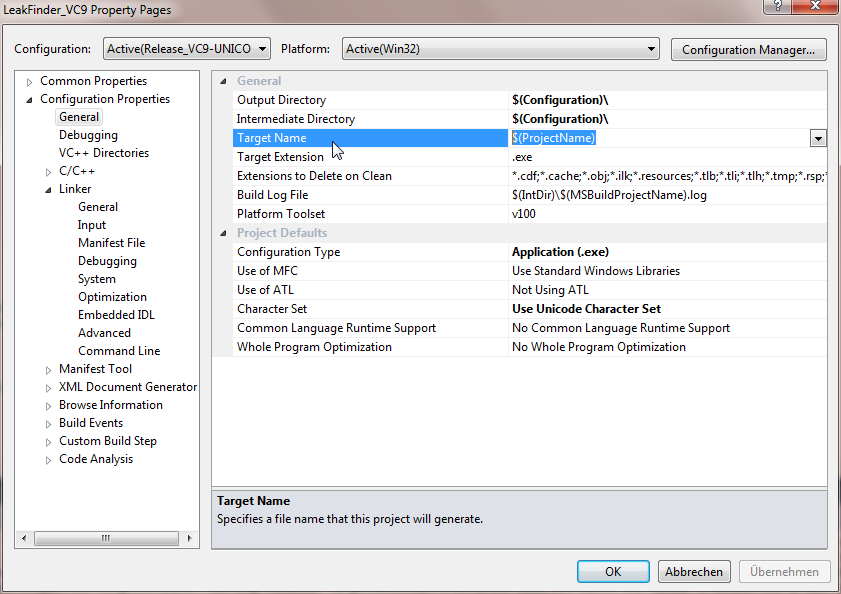 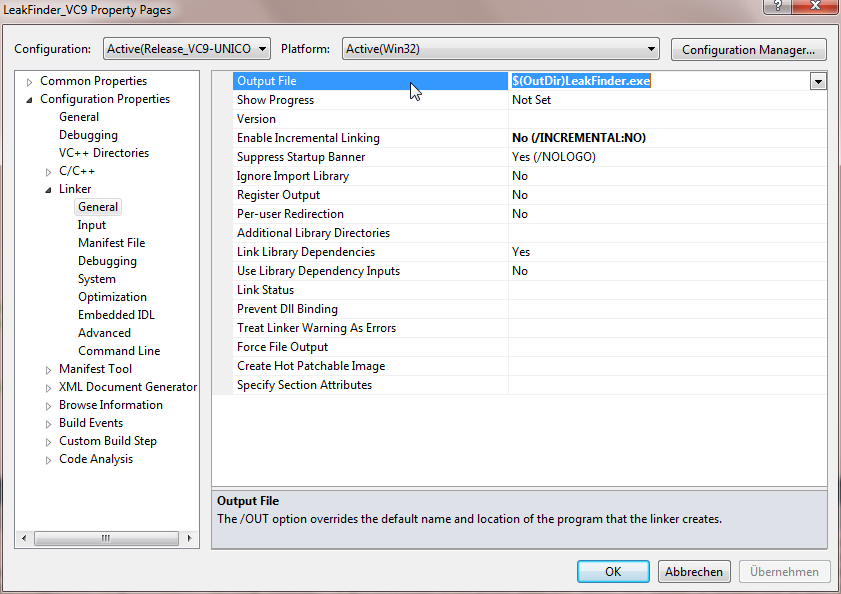 If you match those two, the warning will be gone 😉

For example, if you have named your EXE in Debug-Builds: “MyAppd.exe” and in Release-Builds “MyApp.exe”, I suggest that your only change the “Target Name” in the General-Page to “MyAppd” (for Debug) and “MyApp” (Release) or ($(ProjectName) if it is the same name as the project).
Then you must also change the “Linker | General | Output File” to the default setting: “

If you want to change the output directory, you should the the “General | Output Directory” setting.

If you have installed VS2008 and/or VS2010 (full), you will notice that OleView is not installed!
The product team decided to remove this utility from the tools-folder.

But you the source-code is still available! You can find it under

Extract the files and build (the release version of)

Also, the same problem is with the OLE-Test Container (tstcon). This application can also be found in the samples.
See also: ActiveX Test Container Application is Still Available

Here is now the offical statement for the supported runtime OS:

This restrictions comes from a security desicion to have a hard dependency on EncodePointer, which is only available in the above OSes.

If you want to give feedback for VC++ for the next version of VS (after VS2010), you can fill out the VC++ product team survey:
http://blogs.msdn.com/vcblog/archive/2010/03/22/vc-developer-survey.aspx

The latest dbghelp.dll (version 6.12.2.633), which can be downloaded via the newest WDK, seems to have a major bug regarding the function SymGetModuleInfo64 (which is used in almost every project, if you want to display module-infos).

A user reported this bug in the WinDbg newsgroup.

I now build a small repro-code, which shows the problem. You can download the code here: dbghelp_bug_6.12.2.633.zip

The problem is, that the size of the struct “IMAGEHLP_MODULE64” has changed. They added two DWORDs at the end (the struct has now a size of 0x690 bytes). This is normally not a problem because the struct has a “SizeOfStruct” member, which must be set, prior to calling the “SymGetModuleInfo64” function.

But the new version does not support the older version of the struct with a size of 0x688 bytes, which is commonly used because this was the last version since 2003!!! It only supports the older versions from 2002 and before.

So I hope that this major bug will soon get fixed… but after the WinDbg-Release seems to be coupled to the WDK-release, we can wait until next year…

There is a “research” project to access the msdn-web forums via a nntp-bridge. The offical version is “V1″… but I must say, that it is still Beta1 😉

For example, there is a bug with the DateTime-Format, which uses the current system locale… This bug was reported severaly months ago, and nothing happend… In january and february it was not a problem, because “Jan” and “Feb” are the same in english and german… but in “März” the NntpBridge started to report all postings with “01.01.1970 01:00″… because it will report the date as “Mrz” instead of “Mar”… which is somehow bad…

So I decided to make a quick fix for this behavior. You just need to add the System.Globalization.CultureInfo.InvariantCulture as parameter to the ToString method.

Here are the steps, how you can fix this by yourself:

Yesterday a new release of “Debugging Tools For Windows” was released. Until now, it was possible to download the package as a single download of about 17 MB in size.

Starting with the new release, it seems that the Debugging Tools For Windows is now integrated in the WDK which means to download a 620 MB file.

Also it seems so, that the WDK does not install the Debugging Tools For Windows, it just installs a link to the setup…
So the question is: Why not provide the setup as a separate download as in previous version?

Here is a quote from the Debugging Tools For Windows download page:

Conclusion: We will never understand marketing…

The Shim database is a mystic area inside windows… For example it will display an UAC (admin) prompt if your application-name contains the word “*instal*”.
You can display all available shims with the Application Compatibility Administrator by using the /x command line switch.
Also there is a tool from Heath Steward which dumps the database into an XML file.
Of course, he failed to prvide the source-code of his sample project.
Also, Alex Ionescu wrote a small dump tool, but also has never published it…

So I decided to dig into this almost not documented world and write a small Shim-Dumper and Exe-matching tool (whitch source code 😉 ).

You can use it either for dumping the shimdatabase like:

This will redirect the output to an xml-file and will look something like:

You also can use this tool to find out, if an application has a shim applied:

Currently it just displays the TagId of the Shim. You can use this to search the xml-file for the corresponding id.

Have fun, using this tool 😉 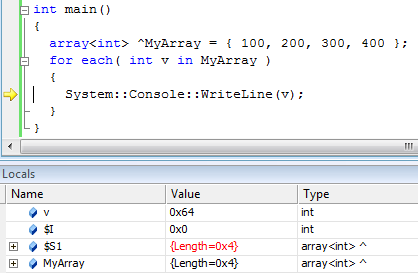 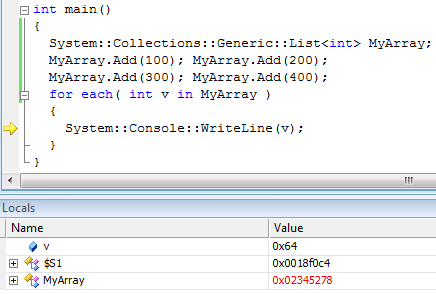 If you upgrade from VC6 to VC2008, then your project will automatically converted to the new format.
As a side-effect, it will also default to the new exception handling which breaks compatibilty to VC6.

For example, the following code will work as expected and will crash in VS2008:

So be aware, that if you rely on asynchonus exceptions, you need to switch the expetion model in the C/C++ project settings under “Code generation | Enabled C++ Exceptions: Yes with SEH Exceptions (/EHa)“

If you have ever published an article on CodeProject, you will see that maintanance an ariticle is practicale impossible. In the last several years, I improved the source-code of my “StackWalker” article outside of codeproject, but this also leads to confusion…

So today I moved at least the source code to codeplex:
http://stackwalker.codeplex.com/

Today I published my first release of the LogSubstPol on CodePlex.

It automatically embeddeds the comment from the check-in dialog into your source code.

Please feel free to post some comments in the discussion section.